The Digital Duopoly Cements Itself

Chart of the Day: Google and Facebook online ad revenue surges whilst revenue of all other providers shrink.

Healthy markets are defined by competition. Consumers have many providers to choose from, and those providers must constantly innovate to improve their service or make efficiency savings to be able to reduce their price - or else the consumers will move to a competitor which is doing so. Monopolies are terrible for consumers because they are defined by a lack of competition - hence why in most countries regulators explicitly ban companies from establishing monopolies in most sectors. But what about Duopolies? This is when a market is dominated by two large players - they still compete, but often the competition is less fierce because of the lack of other providers. 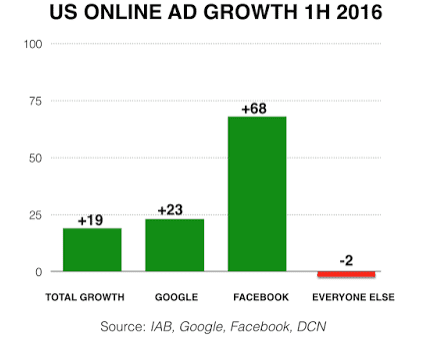 As you can see from the chart below, Google and Facebook now make up 2/3rds of the online ad market, leaving everyone else making up only 1/3rd of online ad sales. 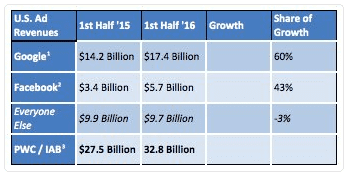 This may be because Facebook and Google offer superior service and better value, but it is important that the market retains other providers to keep it dynamic.

How businesses can serve international customers

Every step of international marketing needs to be considered carefully because your customers overseas have very different requirements Proving a big success nationally can make business owners hungry to expand further and while approaching the international market is something many …..

Who in the agency should work on discovery and how can you convince clients it should be paid for? In the Smart Insights Agency Guide to Discovery, I suggest a checklist of the areas you might explore as part of a …..