The era of online publishers may be coming to its end. More and more statistics are showing that people receive news from sites such as Facebook rather than going to traditional media sources. Furthermore, once people read news from social outlets, they generally discuss the stories on their on Facebook and Twitter pages rather than on the sites where the pieces originated. This means, online publishers are losing traffic as a result of social media rather than experiencing further growth.

Since Facebook announced its new “Instant Articles” feature, which allows anyone to publish articles almost automatically, the threat is becoming even more real. After all, if anyone can produce content with automatic access to a built-in audience as well as conversational tools, why would anyone ever need authentic online news sources?

This is the dilemma the industry is currently facing--and the signs are becoming increasingly widespread and concerning. Take a look at these statistics for insights:

Online publishers are seeing a decrease in subscriptions worldwide. According to Reuters only roughly 11% of Americans actually pay to access their news. In the UK, the numbers are even more scarce. Only 6% of people there buy subscriptions to online publications.

Why might that be? It’s hard to pinpoint the exact culprit; however, if people can easily access news while casually browsing and chit-chatting with friends, why would they need to put out the cash for a subscription? Furthermore, since newsfeeds give users access to stories and news sources they follow, people are much more likely to find stories they are actually interested in. Logically speaking, that’s a pretty good reason to keep news social rather than paying for legitimate news subscriptions.

Obviously, money isn’t everything. But it is an indicator of a larger problem. If people are not willing to support online publishers, it shows that their offerings are no longer relevant and are suiting their needs less and less.

2- Traffic to homepage went down by 50% in two years

For most websites, the homepage is a pivotal part of the customer journey. Generally speaking it's where users become oriented with the purpose of the site, the type of content they will read, and so on. But for the New York Times, the homepage is losing its relevancy.

In the New York Times Innovation Report, the media giant reveals that traffic to their homepage dropped by 50% in the past two years--confirming the fact that visitors are primarily coming to the site through their discovery of specific stories of interest found on external sites rather than using their site as a means to discover important news.

Whereas in the past people went straight to the Times or Post as a direct news source, it seems that today, people choose which stories they want to read as they appear on their newsfeeds. Of course for news outlets, this is far from the ideal scenario as studies show people that visit a news site directly spend triple the time on the site.

Indeed, the dawn of social news has arrived, and online publishers are realizing that their survival depends on altering their strategy to become more socially oriented. This is why sites such as Huffington Post and Buzzfeed have prospered tremendously by providing news geared at a social audience. To get the best of both worlds, many online publishers are employing social features such as newsfeeds, notifications, and conversation tools so people can get the same social experience as they would on Facebook while browsing the news. 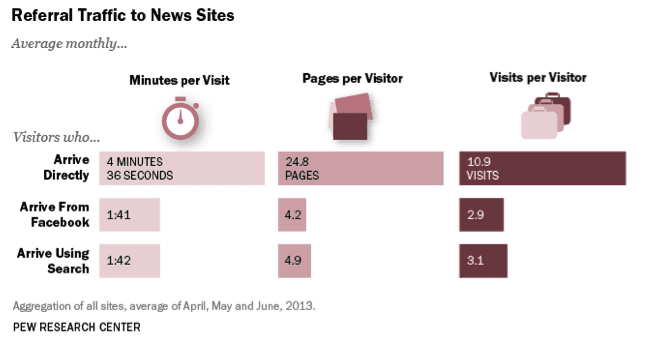 According to Pew Research Center, visitors that originally arrive to online news sites tend to view 24.8 pages in the duration of their visit. In contrast, visitors arriving from Facebook only view 4.2 pages. Since page views and level of engagement are among the most important key performance indicators on any site, the fact that these are not adequately reached when social outlets are in the picture is bad news for online publishers.

Furthermore, the same study reveals that visitors coming from Facebook will have around eight less visits to the website overall. Needless to say, this fact shows a significant drop in customer loyalty when compared to visitors who arrive organically. 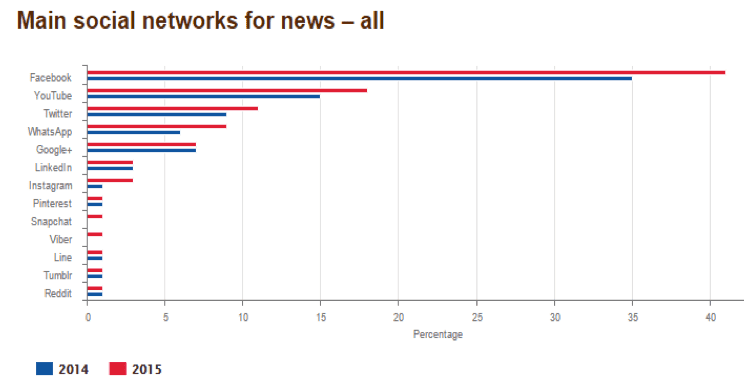 According to Reuters, 41% of people use Facebook to access news stories. This number is even more shocking in countries such as Brazil where the number reaches 70%.

As we previously stated, this is of major concern for publishers since most of these users will visit fewer pages and engage far less than those who arrive organically. In addition, there is very little likelihood that such users will formulate an online community since their conversations and interactions are generally focused on Facebook rather than major news sites.

Incorporating user-generated content onto such sites is a great way to combat this trend. By getting users directly involved with your brand as well as particular stories on your site, publishers are significantly more likely to achieve the loyalty they need to survive the digital age.

5- Only 10% of NYT web traffic comes from social media 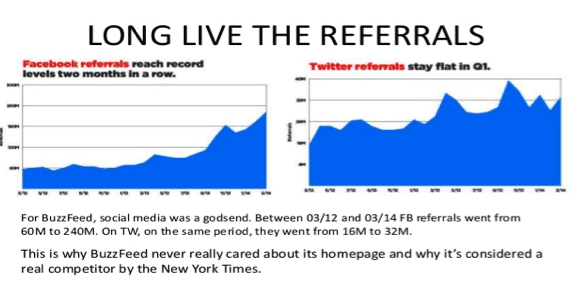 Given the fact that 41% of adults are using Facebook to discover news, it would be logical to assume that Facebook would drive their masses of users to the news sites most of the stories originated from. While this may be true in some cases, the numbers aren’t nearly large enough to support the needs of sites such as the New York Times.

In contrast to the 10% the NYT is taking in from social media, Buzzfeed is able to draw 70% of their traffic from sites such as Facebook. Why might that be? Buzzfeed has developed itself as being a socially oriented news source. They are easily shareable, likeable, and most importantly-- interactive.

People who read Buzzfeed stories can interact socially by rating their reactions, taking quizzes, and more. Other sites such as BoredPanda and EW.com employ social elements on their sites such as likes, ratings, newsfeeds, and notifications. By using strategies such as this, they are able to grow and succeed in the increasingly competitive digital marketplace.

As many online publishers are discovering, the news market is rapidly changing as a result of the prominence of social media and new ways of engaging with news. People today demand more social, interactive, and personalized elements in order to grab their attention and drive them to explore. While the era of online publishers may not be dead yet, if online publishers fail to address these growing needs, their traffic and engagement levels will continue to suffer tremendously.

Thanks to Nadav Shoval for sharing their advice and opinions in this post. Nadav Shoval is the CEO & Co-Founder of Spot.IM, an on-site community that brings the power back to the publisher. Prior to Spot.IM, Nadav has developed and founded 4 technology startups. Spot.IM is his fifth venture. Nadav is a technology erudite and a sports addict.