Master new marketing skills with up to 50% off memberships

Which apps do people use the most?

Chart of the day: social media apps are the most used apps

According to research by The Manifest, 39% of respondents said social media apps were the most frequently used apps on their smartphone. This was followed by gaming apps (10) and messaging apps (10%) and then retail apps (7%).

Most users are using apps to keep in touch with people via social media and messaging or to play games, perhaps while they on a car passenger or on the train to work. Peoples smartphones are assisting peoples lives by keeping them social whether that's on social media or via messaging apps, and phones are also entertaining people. 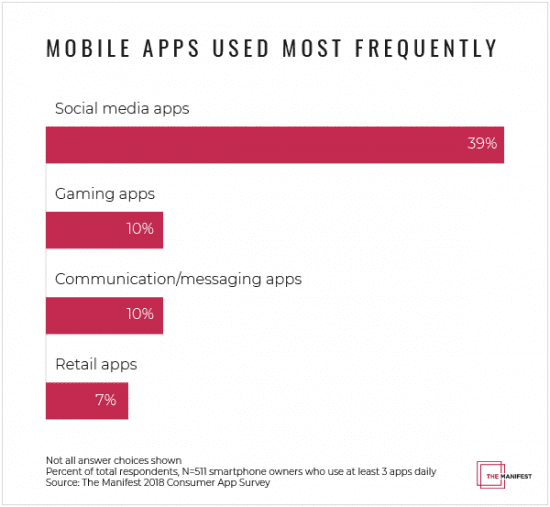 The research looked at wider mobile app uses and found over half (51%) said they use apps 1-10 times per day, though, in reality, people don't sound so this could be underreported.

The survey also explored why users may delete apps, finding a quarter (25%) delete apps purely because they lack storage on their phone, over 3 in 10 (32%) delete apps because they haven't used it. It's likely this is why people believe they should delete an app, but a lack of space forces users to re-think why they have the app on the phone in the first place and if they use it enough to keep it.

How to use the 7Ps Marketing Mix

What is the 7Ps Marketing Mix and how should it be used? The marketing mix is a familiar marketing strategy tool, which as you will probably know, was traditionally limited to the core 4Ps of Product, Price, Place and Promotion. …..

What is digital marketing? How to succeed in 2022.

Transform your business to grow in 2022