Spotify is a streaming music service originally developed in 2006 in Sweden and launching in 2008. Spotify Ltd. now operates as the parent company in London while Spotify AB manages research and development in Stockholm.

This case study about the online music subscription service illustrates how different elements of the mix can be varied online. It also highlights success factors for developing an online marketing strategy. We've included it on Smart Insights for readers of Dave Chaffey's books before the next edition is publishes - it replaces an earlier case study 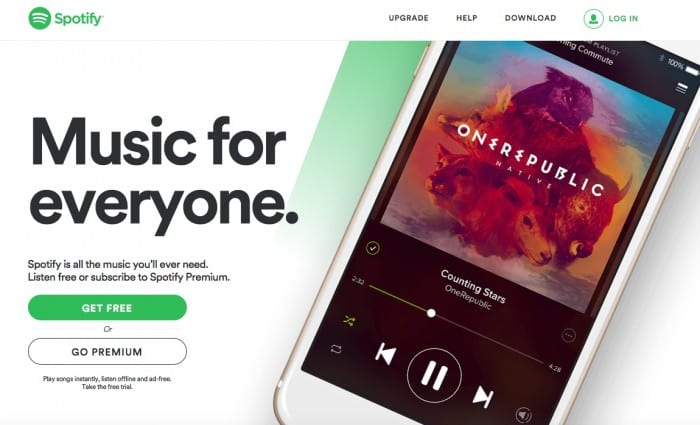 In early 2015, Spotify was valued at more than $5 billion. Investments in the growth of the company have been $1/2 billion in seven rounds of funding from 17 investors. It is currently rumoured to be about to rerevceive an additional 500 million in funding in preparation for an IPO.

Spotify in the context of other online music providers

Spotify was not the first online entrant to online music services, but it was an innovator in marketing approaches, technology and subscription options that have enabled it to become a market leader in music subscription.

The first major entrant was in 1999 through Napster which we have featured in previous editions in this chapter. Its initial incarnation was as the first widely used service for ‘free’ peer-to-peer (P2P) music sharing. The record companies mounted a legal challenge to Napster due to lost revenues on music sales which eventually forced it to close. But the Napster brand was purchased and its second incarnation still offers a legal music although following bankruptcy in 2008, it has had several owners such as Roxio and Best Buy. Napster now focus on the music subscription service as part of the Rhapsody music services in direct competition to Spotify.

Spotify operates a freemium model with the majority of its users streaming music to their mobiles or desktop via apps or web browsers. Users subscribe for free get ads between tracks which are part of the Spotify revenue model. Users of the free service encounter audio ads every five or six songs, or approximately three minutes of advertising for every hour of listening.

Since many users enjoyed the unlimited free music option, Spotify moved to limit this in April 2011, when they announced that audio streaming would be limited to ten hours per month after an initial unlimited listening period of 6 months. This restriction was removed in 2014.

Spotify Premium users who pay a fixed monthly fee get additional features (Figure 5.11) including offline listening and no ads.

The Wikipedia entry for Spotify has charted the growth of Spotify:

Through licensing the service to other businesses there are further opportunities for revenue. For example, in January 2015, Playstation announced that Spotify would power their new music service called Playstation Music.

How does Spotify's licensing service work with Playstation?

The company pays roughly 70 percent of its revenue for royalties to artists and companies that hold the rights to the music. Spotify pays artists and labels per streamed track, with the Spotify artists page explaining that there is an average an average “per stream” payout to rights holders of between $0.006 and $0.0084. Artists have questioned the value that Spotify returns with some major global artists such as Taylor Swift and AC/DC withdrawing some, or all of their music from the platform.

However, for many others it provides a way to reach new audiences through recommendations and playlists and gain royalties from listeners who they would previously have not received any revenue from. Spotify makes the case that is aims to regenerate lost value by converting music fans from these poorly monetized formats (e.g. illegal download services) to the paid streaming format, which produces far more value per listener.

In addition to the core music listening service Spotify has developed other features to add to the value of the service which have also given opportunities to spread awareness of the site through co-marketing.

Spotify claims that it’s users are highly engaged with the average multiplatform user spending 146 min a day using the service. Between 2013 and 2014 the share of users listening on mobile tripled although more than 50 percent of sessions are still on desktop.

Spotify has developed a range of innovative advertising formats to build its revenue, mainly from its free subscribers. These formats are described as:

One example of a campaign run on Spotify was for the launch of the BMW 320i for which an 'American Road Trip' campaign was developed.  A branded app on Spotify enabled users to select from one of five iconic American road trips. Based on their selection, a custom playlist is generated featuring songs and artists from regions along the selected route. A BMW video was served during playlist generation and the final playlist was sharable via social media. The campaign resulted in more than 14,000 playlists being created.

Do Spotify have competition?

Spotify faces competition from existing online music services such as iTunes and Napster, but given that this is an evolving marketplace, other major competitors can be expected. For example, in late 2014 Google launched its Music Key  subscription service via YouTube and Apple purchased the Beats subscription service earlier in the year. Amazon also now offer Prime Music subscription to customers who are in its loyalty programme

Unlike in the ‘dot.com era’ when startups with global aspirations launched using TV campaigns, Spotify’s growth has been a more modest approach relying on Word-of-mouth, PR and co-marketing rather than big ad budgets. When the service went live in October 2008, it kept its free service invitation only, something that had been in place whilst it was in the final stages of development prior to public launch.

By introducing scarcity, the invitation-only element was a vital part of the platform’s rise. It helped create a viral element to the service, with users each having 5 invites at first to share with their friends.

Similarly, the launch of Spotify in the US used private ‘Beta’ invites to create a buzz as those with access shared their use of it in social media (and through word-of-mouth)

The music streaming service went live in October 2008, and it kept its free service invitation only, something that had been in place whilst it was in the final stages of development prior to public launch.

The invitation-only element was a vital part of the platform’s rise. Not only did it help manage the growth level of Spotify, but it also helped create a viral element to the service, with users each having 5 invites at first to share with their friends.

Spotify has used co-marketing and partnerships with publishers to increase it’s reach by embedding different formats of widgets on other sites. For example Drowned In Sound has a monthly playlist which it embeds within its blog which encourages its readers to engage with Spotify. A music magazine like NME offers apps with a range of playlists which again will generate awareness and engagement. Other partnership services enable Festivals and Charities to engage their audience through Spotify playlists.

To grow its audience beyond its traditional younger audience Spotify today invests more in campaigns. In 2013 it launched a multiplatform campaign, with a 30-second ad spot during the season premiere of NBC's 'The Voice.' Sixty-second versions of the commercial aired in 'The Tonight Show with Jay Leno' and 'Late Night with Jimmy Fallon.'

In 2014 Spotify launched a 'Music takes You Back' ad ( in the UK and US which featured in cinema, digital signage and online.


It centres around three videos which showcases three different people’s stories through the medium of Spotify, Facebook, text messages, Skype and Instagram. It aim is to show how Spotify can bring people together through its integration with social media. Spotify decided not to use TV creating 75 to 90 second videos rather than the typical 30 second TV ad break slots.