Chart of the day: According to research by Salesforce, over half of ad spend is allocated to Facebook (including Instagram) or search marketing (Including Google search) 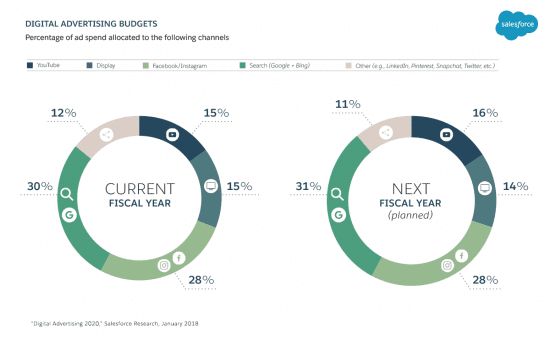 Some brands such as P&G are cutting digital ad spend though, stating that many brands are wasting too much money on ineffective digital advertising. They cite concerns about who sees the ads, ineffective targeting audiences being a key factor in their decision. P&G has since cut over $100 million of digital ad spend, which resulted in no negative effect on sales.

As for the dominance of Facebook an Google, a lot of money might be going in their pockets, but marketers don't waste money, Facebook ads and Google paid search are just as effective as ever for marketers. But don't put your eggs all in one (or two) baskets, a combination of YouTube, Facebook Ads, Paid search and Google display network all work better in harmony. It's also going to be interesting to see how advertisers evolve to use Instagram and Facebook in a crowded world full of endless amounts of content.