Most of these companies are dominating online, but where is all their traffic coming from?

Digital marketers, web specialists, and online-business owners alike have been seeking out digital solutions to serve their marketing needs for a long time now.

Today, I’ll be diving into how some of the top marketing SaaS companies drive online growth. Specifically, I’ll be examining their sources of traffic. What makes this study interesting is that it will challenge each company's product offering.

Each of the 100 companies that I included falls into a certain category such as SEO, social media, content marketing, web analytics, etc.

Are these companies “eating their own dog food” or do they talk a big game about the benefits of their product without leveraging the “benefits” themselves?

Let’s break down how the study was done

First, I set out to collect 100 websites that fall into the marketing SaaS company category. Using both Alexa and Similar Web features, I was able to create a large list of various sites within this category. Then I cut the list down, allowing for several industries and a wide range of monthly traffic. At this point, I collected data for unique monthly traffic, traffic share (desktop or mobile), and traffic source. The traffic data included was based on the averages of the past three months. 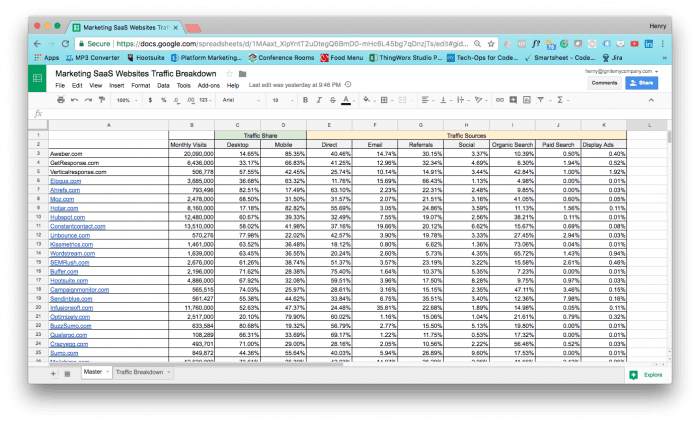 Finally, I had a chance to examine the set of data in aggregate, along with breaking it up into segments and drawing comparisons.

Disclaimer: SimilarWeb (the source of traffic data), along with other traffic predictors, is not as accurate as we might hope it to be. Regardless, all the numbers you see in this study are from the same source, so we can at least assume that they’re on the same playing field.

What were the aggregate results?

As for an overall look at the results of the study, it’s quite obvious that direct, referral and organic search dominate as the top three sources of traffic. 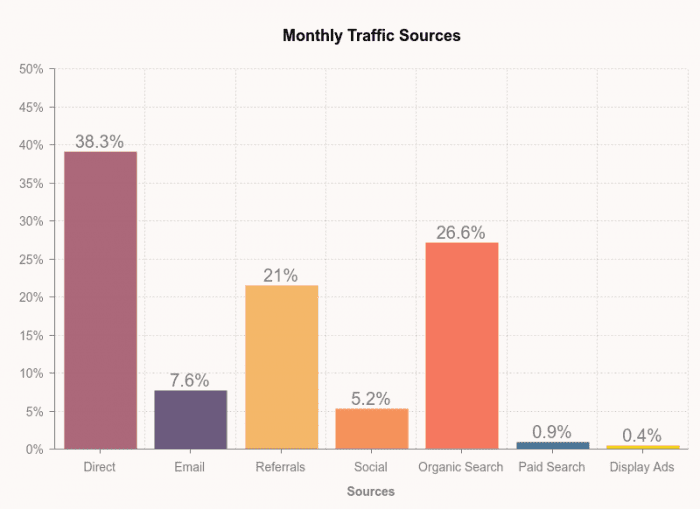 It’s disappointing that so much of the traffic falls under direct. We can only assume that this is a combination of many different sources, such as the below:

This means our data is skewed, but that's the reality of web traffic. We all know how much of a problem this is in Google Analytics.

Moving forward, we have a share of traffic data: Desktop vs. Mobile.

At first, I was surprised to see that desktop traffic was so much greater than mobile. However, it starts to make sense when you consider how these marketing tools are used. They tend to provide the best user experience on desktop. 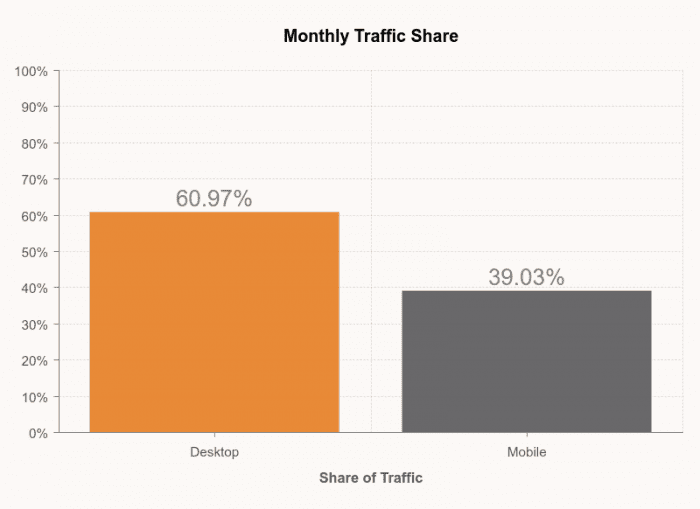 Time to break down the data more

After an aggregate view of the data, I wanted to examine traffic sources based on the estimated monthly traffic provided by SimilarWeb.

I broke it up into three segments:

When the averages for each of the three segments were calculated, this was the result: 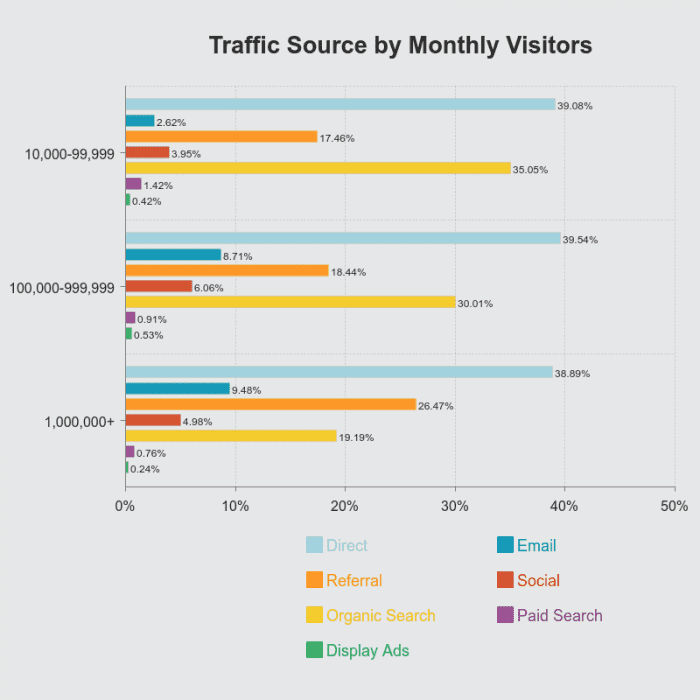 Is this enough of an indication to make a decision on? Absolutely not.

With a data set this small, we are quite far from statistical significance. Regardless, we can still make inferences based on the present data, our knowledge of the SaaS market, and common sense.

For example, it may seem odd at first that organic search is declining. It’s not that it’s declining, but rather it’s becoming a smaller percentage of the large sites’ overall traffic.

Why would this happen?

These conglomerate sites have built up their reputation in the industry, earning backlinks and an authoritative presence. This means a lot more referrals.

However, this makes me wonder why they don’t have a large number of direct traffic, as I would assume that these are well known sites which people would directly enter.

Perhaps it has something to do with how convoluted this metric is.

Here you can find the traffic share data based on the three segments of monthly traffic: 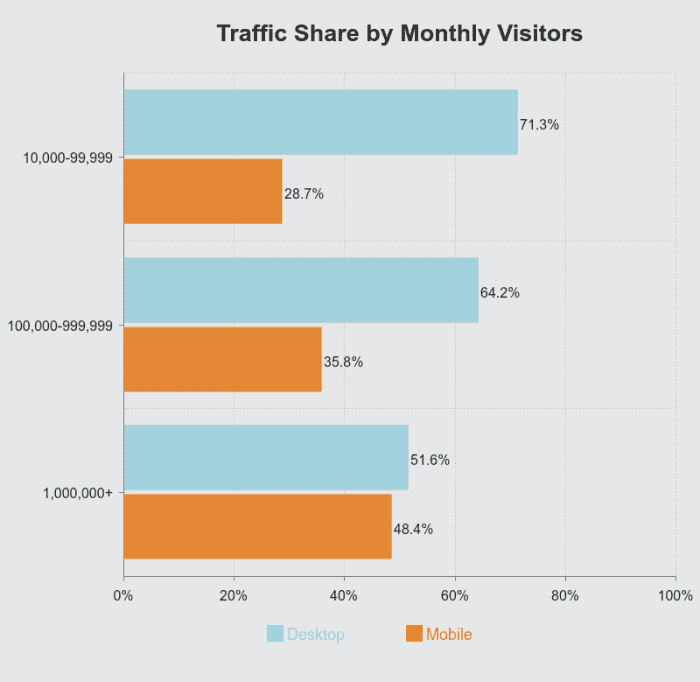 My only explanation for why this would happen is that the larger volume of data exposes the worldwide trend that is occurring with mobile.

The fact of the matter is that these large websites attract so much traffic, that their traffic is less targeted (relevant) simply because of the sheer amount of referrals and organic traffic that they drive. 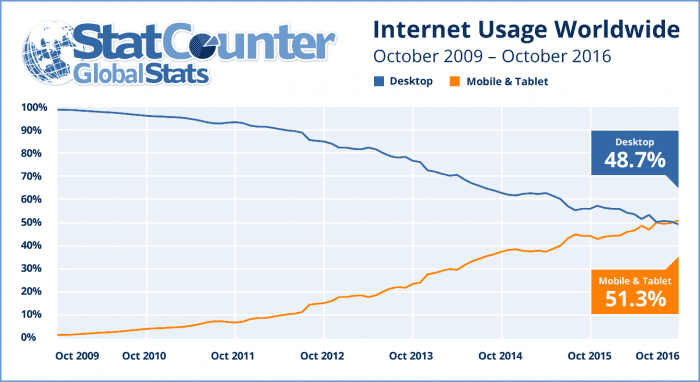 Do marketing SaaS companies practice what they preach?

Now it’s time to break it down by SaaS offering.

Some of the major categories in this study include analytics, automation, email, social media, and SEO.

Below is the breakdown of these offerings. 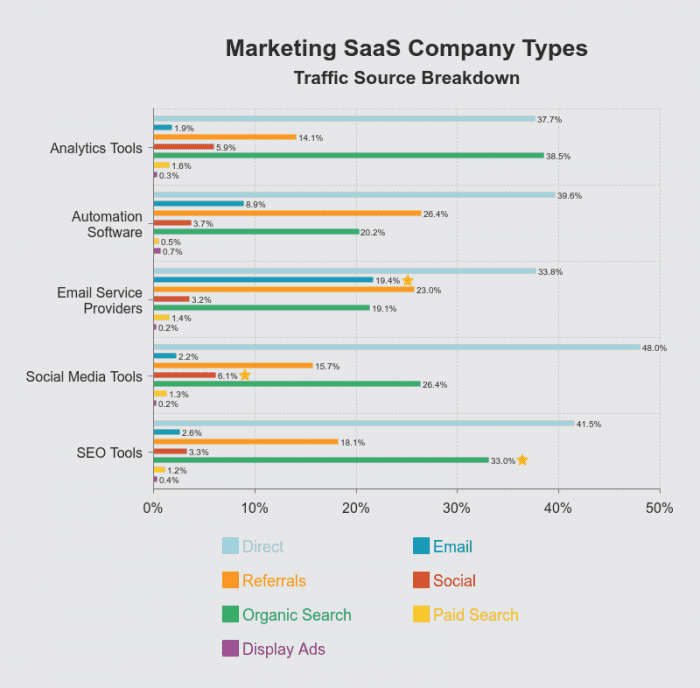 As we could have guessed, social media tools lead in social traffic and email service providers lead in email traffic.

Unfortunate for the SEO category, it holds a close second to analytics tools!

How does this data serve us?

Many of the inferences we are making are pure conjecture.

Not only are we dealing with a  small data set, but the inaccuracy presented by traffic predictors isn’t very helpful, not to mention the amount of traffic that is categorized as “direct”.

Based on what we have analyzed here, some assumptions we can make:

The importance of tracking

The beauty of digital marketing is that we can track nearly everything.

This allows us to understand what’s performing well, what isn’t working, and where areas of opportunity exist. Instead of tolerating a large percentage of traffic that shows up simply as “direct” we can focus on adding tracking parameters to our URLs. Or we can leverage tools such as Simply Measured that allow us to understand other forms of dark traffic, like that from messaging apps.

Otherwise, how are we supposed to make informed decisions?

The power of search

You simply can’t deny the sheer power behind Google.

As expected, organic traffic (direct traffic aside) is the winner here. Both large and small websites are leveraging it to continuously bring in unique monthly visitors and fuel their pipeline.

Unfortunately, we often get caught up in what we see and hear, rather than what’s actually working behind the scenes.

For example, social media appears as a powerful force in our digital marketing repertoire, but how effective is it?

To an extent, it is powerful. But when we look at the amount of traffic it generates, it pales in comparison to organic search. 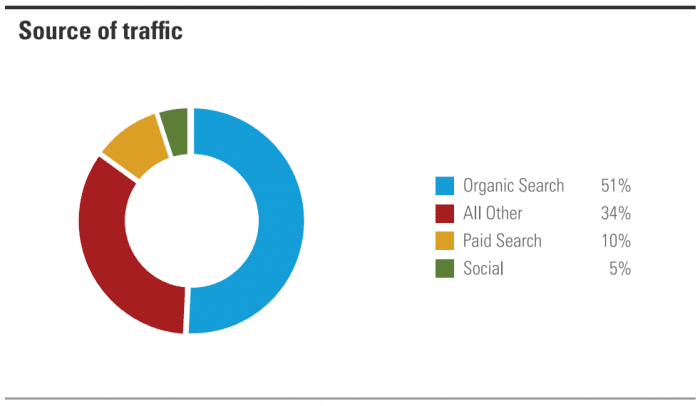 I’m by no means shaming social, it’s important. But we need to focus on the endgame of our online businesses and truly understand the value drivers that lead to revenue.

In the long term, inbound works

An integrated digital marketing strategy is important, we’re all aware of this.

However, when a business’ online presence is just getting off the ground, it doesn’t have the authority of a large, well-known site.

My point is that in the long run, an inbound strategy is effective because it focuses on compound growth, leveraging many channels to drive traffic organically.This may explain why marketing SaaS companies have a smaller percentage of traffic coming from paid search as they get larger.

Ask yourself the difficult questions

Which source is most of your web traffic attributed to? And is this “good”?

What’s the intent of the average visitor from this source? How can you measure this?

And lastly, how can you develop a plan that supports your integrated digital strategy and leverages the most profitable sources?

Those are some difficult questions, best of luck in your online efforts!

Thanks to Henry Foster for sharing their advice and opinion in this post. Henry is is a search and social marketing specialist at PTC. He writes about content marketing, social media, and online growth strategy at IgniteMyCompany.com. You can follow him on Twitter or connect on LinkedIn.

How effective is your digital media?

2023 Digital marketing trends across the six pillars of marketing

Practical ideas for you to use including how to use ChatGPT Each year, for the last 10 years, or so, I have identified the latest trends in digital marketing and forecast what the major trends will be in the year …..