Digital Marketing Around the World

We all know Russia is geographically big, but it is also a big market when it comes to social, search and e-commerce. Russia has 87.5 million active internet users, and 67 million active users of social media accounts. It is estimated that Russian's will make $36 billion worth of purchases online this year. What is more that amount is set to increase considerably to $43 billion next year as shown by this summary from wearesocial. 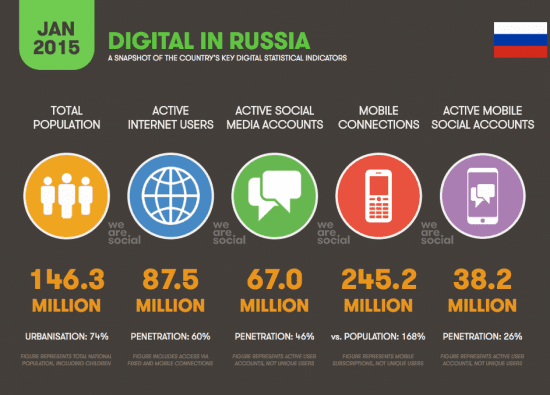 Russia represents a big opportunity as a vast market with high rates of annual growth in the digital sphere. However it also presents a series of challenges because it is very different to Western markets. The big players with which we are all familiar, such as Facebook and Google, do not dominate in the same way as they do in anglophone markets. So if you want to break into the Russian market via digital it is a good idea to get an overview of the popular search engines and social networks in Russia.

The major search engines in Russia

Since 1997, Yandex has been the number one search engine in Russia, followed by Google, which entered the market in 2006. Third place is occupied by Mail.ru, which for a lengthy period was using third-party search engines. Mail.ru enabled its own search engine in 2013. However, in Russia, Yandex and Google take the lion’s share of the market.

This is the distribution of market share between the search engines as of November 2014, according to the Russian company Liveinternet. 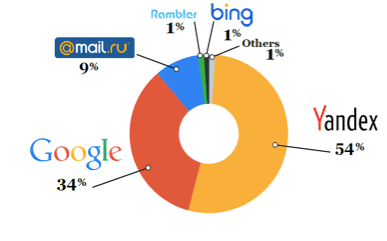 To understand the Russian Internet audience, we will have a look at social networking in the country.

The most popular social network in Russia is VKontakte, which has over 220 million registered users. With over 60% of its patrons aged 25 or older, VKontakte achieves 47 million visitors per day. 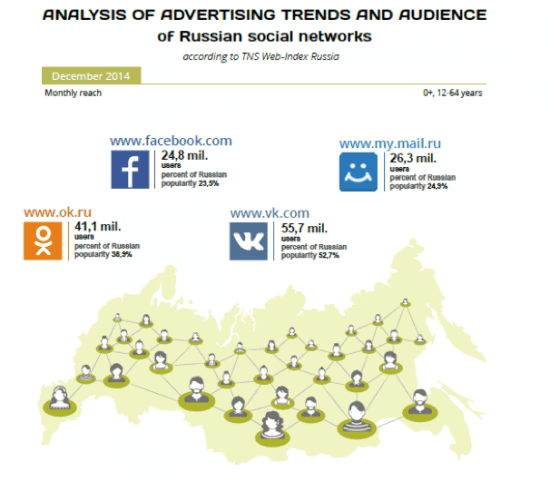 A social network for former classmates, Odnoklassniki has 124 million users. Having just under 60% of its audience in the 20 to 40 year old age bracket, 40 million visits are received daily. 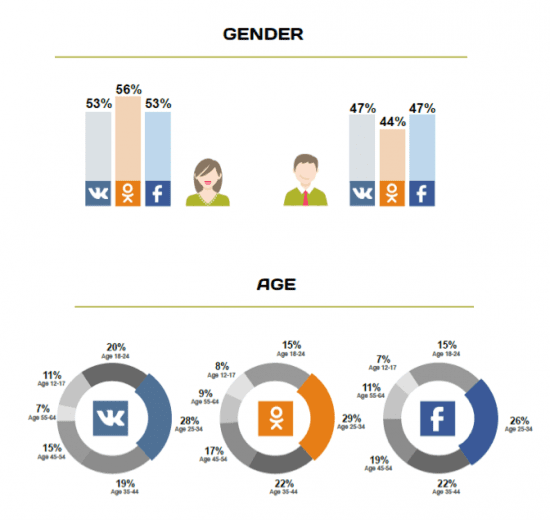 Moi [email protected] (My World) is operated by Mail.ru, the largest Internet company in Russia. 18.6 million followers are recorded per month (TNS, June 2011).

Facebook users in Russia were initially more highly educated and with good English skills. Many are businessmen and top managers. Facebook currently has 8.4 million users in Russia. 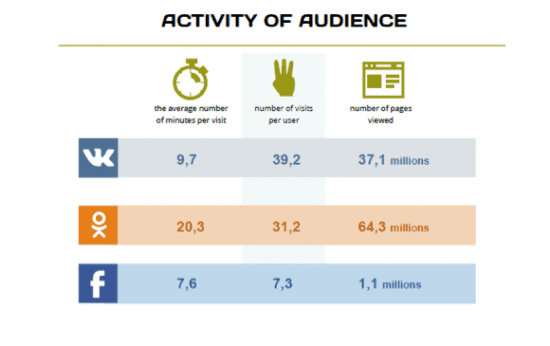 Similar to Facebook, Twitter is not a hit in Russia. As of July 2013 it had only 5.3 million users.

One of the main characteristics of the Russian social networks is that even if their functionality is the same, the audience is not homogeneous. For example, VK and Facebook have a different audience, and even the same people there will behave differently. Thus, you should take into account that the Russian Facebook audience is older than that for VK, usually has a high level of education, and prefers substantive communication.

The following list shows the 20 most popular sites on the Russian Internet, together with time spent viewing these sites. This data is provided by the TNS Gallup Media research agency. 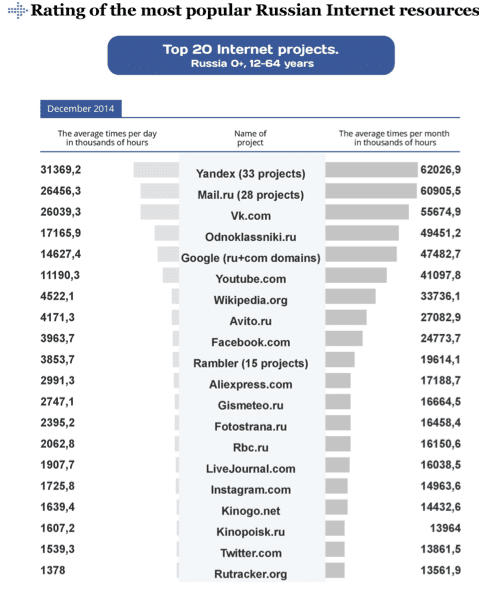 As well as understanding market analysis and market design, knowing the audience’s lan­guage is very important. Having the advertising campaigns localized by a native speaker is a must.

Russian internet users are extremely diverse. People from all educational, wealth, age and ideological backgrounds are represented. As a result, not only do individuals use different Internet platforms to communicate and stay up to date with the news, but also different search engines. Even though all of the social networks provide essentially the same service, they each have their own specific relationship with customers and host dramatically contrasting content.

The Russian national character must be considered. There are many instances of campaigns which succeeded in North America and Europe, but which failed to attract, or in some cases even repelled Russian consumers. This happened despite having high-quality localisation. Certain techniques will not work in Russia, such as applying aggressive pressure. Trying to convince consumers that there is no option but to buy your product will only result in resentment.

Is there a ready market in Russia?

The amount and frequency of searches for your product or service should be analysed prior to launching a campaign in Russia. As well as using Google Trends, there is the useful Yandex service “Selection of words”: wordstat.yandex.ru.

It can be seen in the below chart that there were 361077 requests per month for the keyword ‘Iphone 6‘. It should be understood that this is not stable data and demand is constantly changing. 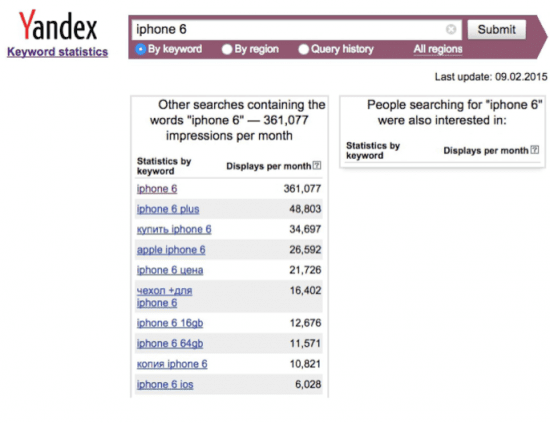 Today, digital marketing tools allow you to get in touch with Russian consumers worldwide. My experience in promotion of international brands on the Russian market indicates that businessmen today are not just interested in the Russian market; they are interestedin the whole Russian-speaking audience, living in CIS countries, Europe and America. As of 2014 the Russian-speaking market as a whole covered more than 270 million people according to the Ministry of Foreign Affairs of Russia. To ignore this huge market would be mistake.

Thanks to Vadim Tylik for sharing their advice and opinions in this post. Vadim Tylik is the founder of RMAA Group You can connect with him on LinkedIn.