If you’re involved in reviewing changes in consumer and business demand for online services as part of planning for 2013 it’s worth a look - some statistics will be useful for presentations to convince colleagues or clients...

While the focus is on the UK since the research is produced by Ofcom, its purpose is to compare with other countries particularly Australia, France, Germany, Italy, Spain, and the United States. So it also has data if you're based in these countries and I have included charts below with comparisons between countries.

I will summarise this latest research on Internet use in 4 areas: mobile use, Internet shopping/Ecommerce, consumer use of different media and consumer-business communications.

1. Internet use with mobile devices

As part of the Ofcom consumer research, respondents were asked about their ownership and personal use of a range of devices. 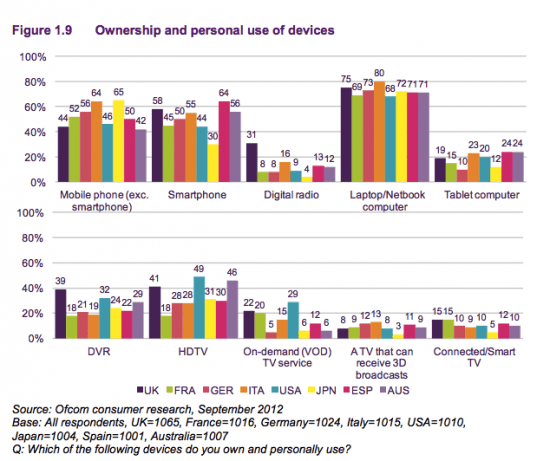 The Ofcom report shows that the UK has one of the highest penetrations of smartphones, at 58%, while just under one in five (19%) has a tablet computer.

Tablet take-up is highest in Spain and Australia, both at 24%. Italy and the US have the next highest claimed ownership (23% and 20% respectively), with the UK in fifth place at 19%.

Online purchase is now more popular in the UK than any other major country, and this is increasingly driven by use of mobile devices.

“UK consumers have now broken the £1,000-a-year spend barrier on internet shopping – more than any other country in our research” 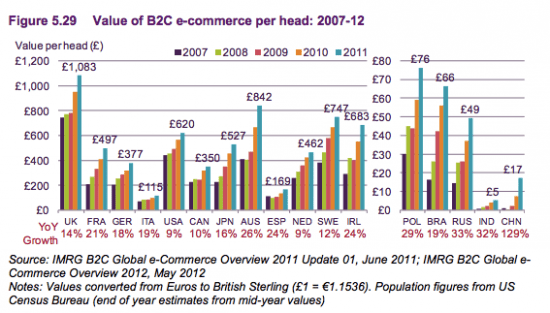 This data is from the IMRG and perhaps shows the growing potential of Ecommerce most clearly with year-on-year growth of 10% plus in most countries. Useful for planning incremental growth where you should be looking to beat these figures.

There is also further information suggesting the importance of mobile commerce - still in its infancy (although this is smartphone only, not including tablets).

3. Consumer use of different types of communications 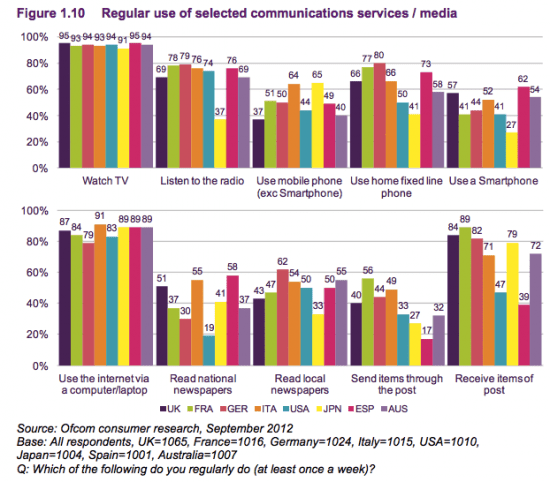 4. Use of Internet communications with business

This chart shows that for all countries, the most popular method of interacting with
businesses is email. Although this will often be for customer service, it shows ongoing acceptance of email by consumers and the continued importance of email marketing. Consumers in Japan are most likely to use email for these communications (74%), followed by consumers in the UK (66%), France (65%) and Australia (64%). Although in Italy email is the most widely-used way of communicating with
businesses, at 45%, Italian consumers are less likely than those in other countries to do this. 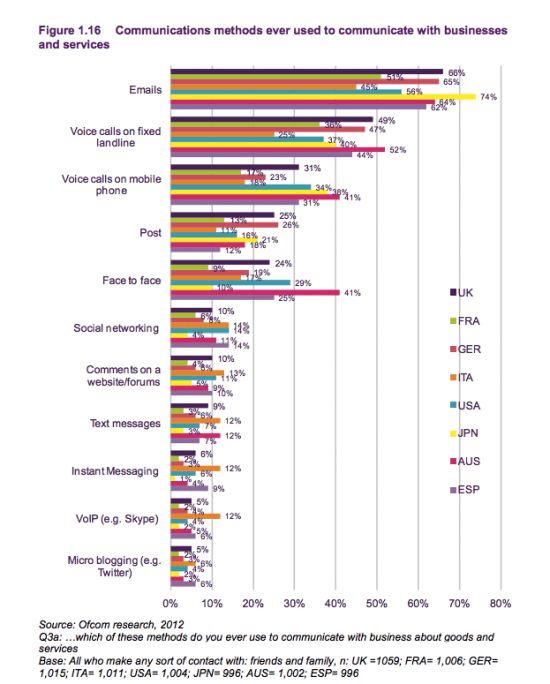 The complete report is 340 pages long! If you want to browse the PDF the link is (currently): Communications Market International Report 2012.

Our recommended free online tools for understanding your customers, competitors and campaign, and how you should use them – across 8 marketing analysis activities I find that when running training courses, the tools I recommend to help marketers are always …..