March 25th update:
A new update covering Europe plus individual reports on France, Germany with Spain to published shortly. Separate reports are also available on Canada and Brazil via the link above.

Research provided by comScore is one of key worldwide sources useful for marketers to help us find out about the changes in use of digital media by consumers. Unlike some of the other paid data service providers, comScore gives a good range and depth of free information, which is why we feature it in our online statistics top 10 sources search engine where we recommend checking their Press Releases page which has useful data about individual countries. comScore have a solid methodology based on consumer panels in each country and tagging of media owned and destination sites. You can read more about the methodology at the end of the downloads.

A summary of the key digital media statistics

I always look for actionable information in these type of reports that can be used to support a business case or new design initiative. In this report the actionable headline for me was this:

This graph shows the pattern across Europe 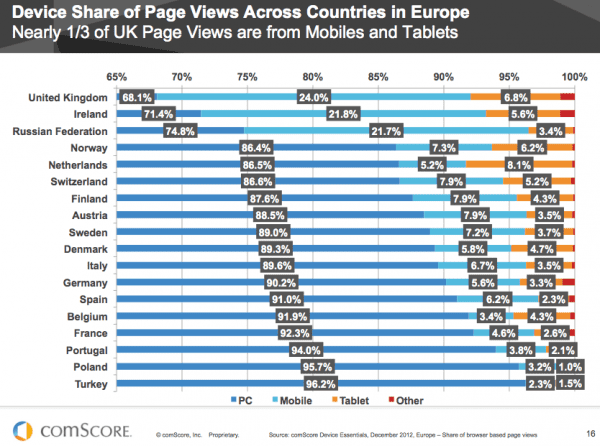 The report shows much lower levels of adoption in other European countries though - not even a fifth in most. So extrapolating UK behaviour to other countries would seem to be a mistake with the mobile figure still key.

The report also has useful summary of dayparts of different device behaviour, similar to others published. 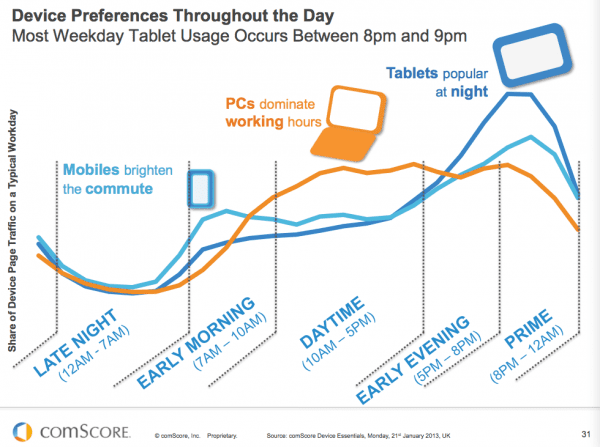 Mobile was again the focus of the section on retail statistics. Audience growth rate is 80% + on mobile, but lower on grocer sites for obvious reasons. 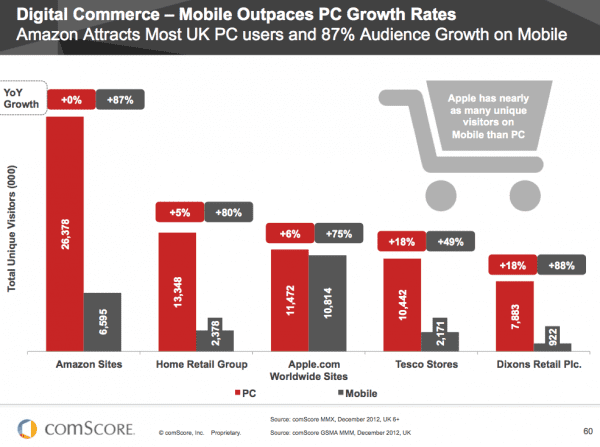 The US report is in a different format and much more limited on depth of detail, but it does have this summary of overall Ecommerce sales across retail - growing steadily, but surprisingly small, showing opportunities for future growth.

There is also a social media section. I thought the most useful data here was the ranking which showed the importance of Tumblr, Pinterest and surprisingly DeviantArt?! 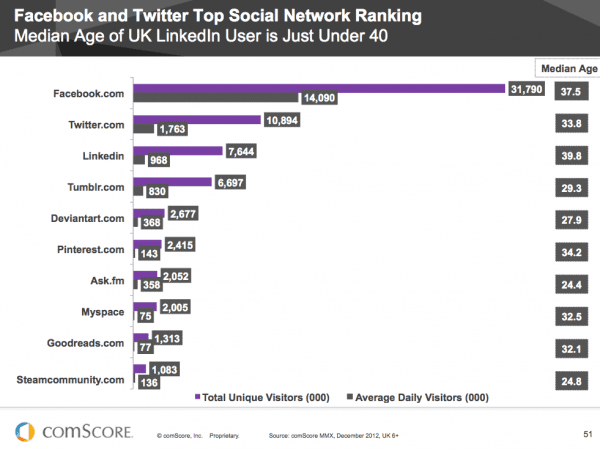 Search and other categories of media

This is a 70 page report, so I have only pulled out some of the most actionable info. Other areas such as search volume, search market share and display are also covered. These could be useful if you work in an agency, but I don’t summarise them here since there isn’t a dramatic change - Google still accounts for the vast majority (91%) with Bing at 4% and Yahoo! Search at 2%.

There is also a section of stats on “Silver Surfers” if that market is important to you.

Statistics for other countries?

If you’re not based in the UK, here is the planned rollout of these online media statistics to other countries. You will be able to access these from the URL above.