How to leverage a mobile app as a lead generation tool

An interview with the VP of Aviasales.ru - a case study of mobile app lead generation

In today’s mobile market, app developers concentrate primarily on making money from in-app purchases. However, there are many other ways to make a profit with an app. At AppInTop mobile app marketing podcast (English, Russian), we talked to Ivan Kozlov, Vice President of Mobile Products at Aviasales.ru about how to leverage a mobile app as a lead generation tool.

Airline tickets are a very complicated product, and this is a low-margin business. But that doesn’t mean that you can’t make money in this niche. It’s perfectly realistic to create a successful product in this area, but to do so you need to provide high-quality and convenient service.
It doesn’t matter who you buy a ticket from: you will still fly on the same plane, sit in the same seat, get the same service and have the same flight attendants. But the ordering process and related services—SMS notification, exchanging and returning tickets is where ease and convenience come in as differentiators.

The travel agents all have different levels of service, and some don’t provide any at all. When you buy a discount airline ticket it often happens that returning the ticket is a lot harder than buying it, that your money will only be refunded after 30 business days, etc.

Aviasales.ru is a metasearch engine; that is, the company doesn’t sell airline tickets, it just searches for them.The service sits on top of this market and its main purpose is to search for the maximum number of airline tickets at the most attractive prices.

How does a mobile app help sell tickets?

A mobile app, unlike a website, allows you to buy tickets in almost any place at any time, for example, when you need one urgently and are on the road.

The numbers speak of the popularity of the Aviasales app. In May 2014 there were around 4 million sessions on three mobile platforms. Roughly 28% of searches are made from mobile devices, 25% of bookings and 21% of all money Aviasales.ru makes is attributable to this app.

The contribution of mobile traffic to the whole business of Aviasales.ru is now rather significant, and continues to grow every month.

Conversion from installs  to paying users depends heavily on the channel used to attract the traffic. The company draws in traffic from a wide variety of sources, so conversion rates vary widely. If 80% of users who install the app make at least one search, 25% press the 'Buy; button, and 5-7% actually buy a ticket, this is a good outcome.

Conversion in the app could be higher, but buying tickets from a desktop is still considered more convenient because of the keyboard and large screen. Some people use their smartphone to search for tickets, but complete the purchase on a full-size computer. So the actual conversion rates for the mobile app are in fact somewhat higher.

The business model is simple.The Aviasales brings a customer to a partner, and if the customer makes a purchase, the seller pays a fixed commission from his profit. It’s a low margin business, and the profit from a ticket sale is at most 5%. As a rule, the partner gives up about half of this to the service which works out to about 2 to 2.5% of the cost of an airline ticket.

But under this arrangement, the service has no need for logistics, and no legal responsibility to users. Moreover, there’s no need for full-scale customer support, as the partners issue the tickets.The service occupies the most desirable position in this chain.

The service continues to develop its technology, but its top priorities now are traffic, attracting users and developing the brand. As for the mobile app, the marketing division at Aviasales.ru consists of 1 person, and he handles all responsibilities for promoting the mobile app.
A different marketing approach is used for each platform. The amount of money invested in promotion can also vary greatly. For example, the advertising budget for the Android app is much lower than for the iOS one.

The app has been at the top of the Travel category in the Russian App Store for a long time. Getting there wasn’t a particular goal, but being in that position has been an asset in promoting it.

As for tactics, a large number of channels are used in promotion. Aviasales works with bloggers, with all online publications focusing on IT and mobile topics and it is also using advertising services of Facebook, and [email protected]

The company tested out incent traffic, but it turned out not to be worth the expense. It spent around $200-300, but there was practically no increase in searches, bookings or revenue. 30% of users performed a search, 1% clicked the 'Buy' button, but no one actually bought anything.

Ranked in order of importance, the traffic sources are: in first place, advertising networks, in second place, ad agencies, with all the rest following behind. A fundamental problem is the short supply of large-scale traffic sources: practically no one source can provide a large supply of traffic.

The average cost per install fluctuates from $1 to $1.5 for iPhones and from $1.5 to $2 for iPads. Sometimes sources appear which provide high quality installs for less, but, as a rule, they run dry rather quickly.

From web to mobile

Aviasales has a strong SEO effort on the web, and around half of its orders are made as a result of search optimization. A strong and recognizable brand does its own work even without promotion in the App Store, the Aviasales.ru app would still remain in the Top 5 or Top 7 of the Travel category.

At present, conversion rates on the website and in the app are almost identical. Why does it make sense to redirect the audience from the website to the app? Because then the brand becomes much closer to the user: it’s in his pocket and becomes more personal as it can be used almost everywhere and in any situation.

Standard methods are used to attract the audience to the app, including badges and mailings. Aviasales.ru now has a subscription service and you can subscribe for a particular route or dates, and the service automatically notifies you of changes in price as it integrates into the mobile version.

Creating a lead-generating app without the support of an “older brother” in the form of the website would be difficult, but not impossible. The strong brand helps a lot at the start as it gives a good boost and helps to reduce the cost of installations.

Aviasales.ru runs a partners program, which contributes decent profit. Now this program is being actively developed for the mobile app.

If it works for you, you can work with Aviasales.ru to make money. For example, the service could be integrated into a travel guide to Europe app and offer users the ability to buy tickets to European cities.

Can you make money with Android app?

The market for Android apps differs significantly from the market for iOS apps. The lines separating categories are drawn somewhat differently. It’s a little harder to survive in travel, because journeys and navigation are combined into one category, and the top places in it are always held by navigation services—Yandex.Maps, etc.

When Aviasales.ru released its Android app, it was convinced that since there are many more Android phones than iOS, that there would be more downloads on this platform. But it all turned out a little differently. In fact, iOS is by far in the lead in terms of downloads, and continues to race ahead. Even looking just at organic installs, Android is a little behind.

As for money, the Android market also seriously lags behind iOS platform (it brings in only about one-tenth of the revenue). But on the whole it does produce revenue, and the platform has a future: it continues to grow at a rapid pace.

The number of installs is gradually approaching one million. From the money standpoint, the contribution from iOS is larger. But marketers continue to develop the Android app. Yes, somewhat fewer resources are devoted to it, but the company doesn’t plan to abandon it.

Plans for the future

Now one of the main goals for development of the company is entering new markets. It already has a product called JetRadar, which is aimed at Western users and has a somewhat different website, has been localized, and foreign investors were brought in. 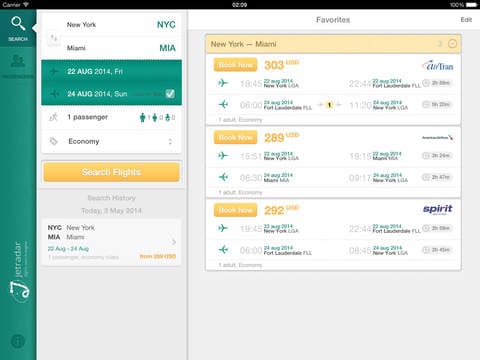 But the level of competition there is significantly higher than in Russia, so the service needs to introduce innovative twist to its service that will genuinely interest its potential users. Since it’s much easier to move forward in the Asian market, the company is betting mainly on that region.

Thanks to Natasha Starkell for sharing  her advice and opinions in this post. Natasha Starkell is a marketer at an automated mobile app marketing platform AppInTop and a producer of AppInTop mobile app marketing podcast (subscribe via iTunes or TuneIn). AppInTop helps reduce cost of mobile app advertising through programmatic mobile ad buying and optimization technology. You can follow Natasha on Twitter or connect on LinkedIn