Planning and budgeting
Models and frameworks

How to structure your thinking when planning for the future

You can't predict the future. I don't care how smart you are, how prestigious the Univeristy you got your MBA from is, or what your horoscope said. The top economists never saw the 2008 financial crisis coming. The top political commentators didn't think Donald Trump would win the Republican nomination. Even the pollsters couldn't get the result of the 2015 UK general election right, and they were only having to predict what would happen the next day.

So given that you aren't going to be able to work out what will happen in future, you shouldn't base your business planning on a single scenario, which we can broadly define as 'business as usual'. Instead, you should plan for multiple scenarios, which will allow you be more responsive to future changes that will impact your business.

But how do you know what scenarios to plan for? In theory you could go on forever thinking about different possibilities and attempting to plan for them. Clearly this will eat up far too much of your time, so a better approach is to utilise an 'impact probability matrix' to structure your thinking. 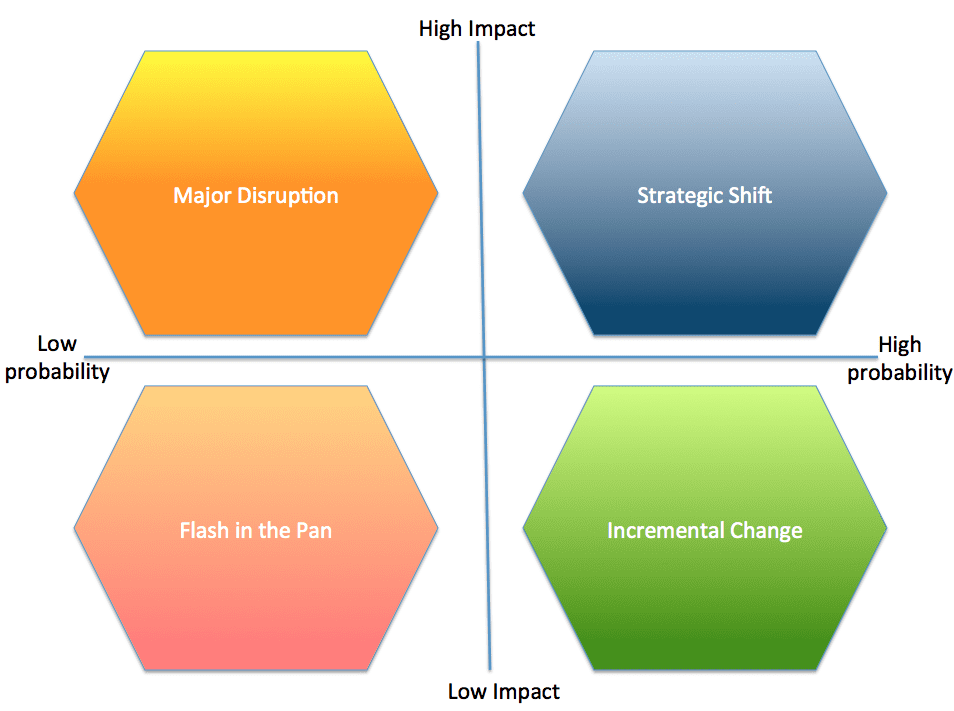 Plot out a number of scenarios which fall into each of the four quadrants. When working out where you should put a given scenario on the chart, think of the 4 different areas as follows:

These are big trends that you can see coming a mile off, but will only slowly change business processes. Think a declining birth rate in the country meaning smaller family sizes or trends around reduced spending on 'things' and increasing spending on 'experience'. Incremental change will be required, but it will be a slow build that requires a similarly patient evolution.

The future will be different from the present, that's the one thing that is certain. But you do get trends that come along and seem to be the next big thing, only for them to pass without making any major impact. Sometimes you do get a 'flash in the pan', although often these trends do come back around once the technology has matured years later. If you thinking on hoping on a bandwagon based around a new emerging technology, you should also consider what would happen if it turned out to be a fad which quickly receded.

This is the area where serious change really needs to be considered. If you a bank, you can't put your head in the sand about the need to facilitate mobile transactions for your customers on the go. The trend is clear, you need to plan for it and may need to make major shifts in the way your business delivers its services if you want to stay ahead.

These are scenarios which you may not think will happen, but need to be planned for none the less. After all, things to tend to catch us off guard. 10 years ago if I'd said there was a major bubble in the housing market the banks wouldn't have paid any attention, but in a year I'd be proved right. A similar scenario today might be what if markets suddenly turn on tech unicorns they consider to be overvalued and we see a similar scenario to the 2000 dot com crash. Hopefully it won't happen, but if it does you'll be mighty glad that you put a plan in place for it.