Use these examples to help inspire your mobile marketing efforts

Marketing campaigns are going mobile. This isn’t a new trend; really it’s about catching up with where people are. It won't surprise you to know that over half of total Internet traffic now comes from mobile devices, and this figure is only going to increase. Marketing budgets are shifting to take account of these trends. A study by eMarketer shows US mobile ad spend increased by a whopping 50% last year, to account for 49% of digital ad spending. By 2019 this figure will increase to 72%, so annual growth rates will remain very high. 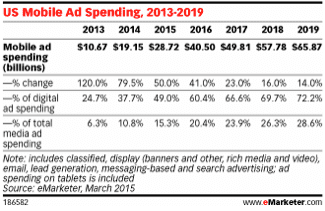 IKEA utilised the capabilities of mobile by creating a mobile app, which transformed its catalogue into an interactive platform. Scanning the pages with the app showed extra features. What is more, it allowed you to virtually place certain products in your room by using input from the devices camera and overlaying the product. This creative approach meant that app got 6.2 million installs, being the number 1 downloaded marketing app for a brand. Users spent and average of eight minutes with the app compared to three minutes with just the catalogue. 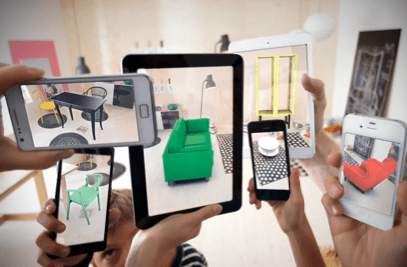 The clever thing about IKEA’s mobile campaign is both that it utilises the unique properties of mobile (the campaign just wouldn’t have worked on desktop) and that it provided something useful and fun to customers so didn’t feel like a marketing campaign at all.

Nissan’s interactive video again showed how utilising the unique features of the device (in this case touch screen) are a brilliant way of getting fantastic results from mobile.

The video itself was engaging (featuring a compact SUV battling evil snowmen) and had various ‘hotspots’ throughout the video where the user could tap the screen to gain more information about various features of the car.

The interactive approach taken by the campaign's creators Juice Mobile and OMD paid off, the minute long ad had a 78% completion rate and 93% engagement.

Audi’s thought so far out of the box with their app it doesn’t even seem like marketing at first glance. Their App, called ‘start, stop’ doesn’t make any attempt to sell its cars (at least not on the face of it). 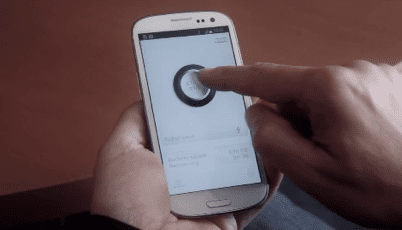 It is a simple app, which detects when open apps aren’t being used and sends users notifications to close it, to save processing power and battery life. This makes the phone more efficient, and promotes Audi’s stop-start technology, which automatically turns the car engine off when stationary to save fuel. The beauty of the campaign is that it makes users associate Audi with efficiency whilst proving them with a helpful service. It doesn’t seem like an ad at all, because it is the sort of app that you might install anyway, but that doesn’t mean it isn’t working to promote Audi’s brand.

Another brilliant example of making a mobile campaign so useful it ceases to even seem to be an advert is Nivea’s ground breaking ‘the protection ad’ for it’s Nivea Sun Kids range. It wasn’t a purely mobile campaign however; it combined mobile with print to create something truly unique.

The print adverts in magazines had a detachable 'protect strip' akin to a wristband, which is put round the child’s arm when the family is at the beach. The parent is invited to download the app, which communicates with the bracelet so that the parent can use the app to dictate an area outside of which the child cannot stray, and if the child does so the app beeps to alert the parent. 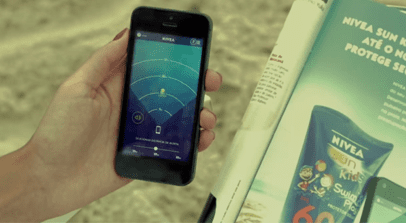 The genius of the campaign, from the Brazilian advertising agency FCB,  is that it makes the customer feel like they are being helped, not sold to. Nivea made a leap of faith when it decided to think outside of the box and run a campaign that didn’t revolve around it’s product (sun cream) but rather around what its target audience wanted (the protection of their children, be it from sun burn or getting lost).

It paid off spectacularly, and was a PR coup. The ads were featured in 10 press articles and 40 digital ones, it generated excitement, won awards and Nivea is still receiving requests for the wristbands a year later.

When it comes to mobile, integration is often a great tactic. Hiscox targeted people logging into Wi-Fi hotspots via mobile near a series of large outdoor boards around Covent Garden. Users of the Wi-Fi hotspots were greeted with a Hiscox ad when logging into the Wi-Fi on their device. This ad was tailored to people living in Covent Garden and reflected the content on the boards.

This integrated and targeted approach by employed by audience intelligence company JiWire worked brilliantly. Click through rates on the ads were 5 times higher than the company usually received on online display ads.

Halifax’s home finder app again demonstrates that offering customers a useful service is often the best way to engage them. The app is essentially a research tool for property hunters, which combines Zoopla data with an augmented reality later and a mortgage calculator. 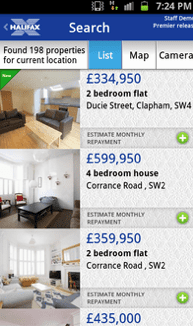 The App helped Halifax reach over 20 million unique users, and thus allowed Halifax to showcase its mortgage products to an audience it would not otherwise have reached.

This example is a bit different to the others I have showcased. The other examples have been showing how brands can use mobile ads or apps to market their products. This is almost the opposite. It is an example of best practice for integrating ads within your app.

Bitcoin billionaire is a mobile game where you tap to get virtual bitcoins and build your bitcoin empire. Its simple and addictive, but most importantly of all it provides anyone wanting to monetise their app through ads a brilliant example of best practice. 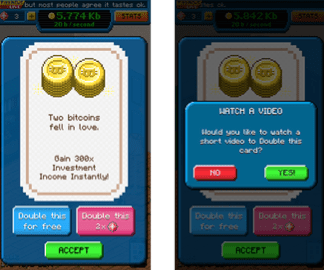 Instead of having banner ads at the top and bottom of the screen, which users can just ignore, or having annoying pop-ups, which breaks up the gameplay and annoys users, bitcoin billionaire integrates the ads into part of the gameplay. Users are given the option of getting in game advantages in return for watching ads, which means the rates of engagement and click through are much higher.

Lessons from these mobile campaigns?

All of these mobile campaigns have something in common, they seek to engage the users and leave them feeling happy with the brand rather than annoyed by having their day interrupted by an intrusive ad. Many of the most successful seek to actively help their target audience by providing them with an app that provides a useful service, so that what they are doing doesn’t even seem like marketing to the user.

Many also utilise the unique properties of mobile, such as touch screen, location tracking, and having an in-built camera. This is critical to bear in mind when planning a mobile campaign. Don’t think ‘how can I adjust my desktop campaign to mobile’ and end up with some simple banner ads that just have less text on so they can be read on mobile. Do get creative, think outside the box and do something that can only be achieved on mobile devices. There is a whole world of possibilities.

Our mobile marketing best practices ebook is a comprehensive guide to helping businesses exploit the opportunities of mobile commerce. Our guide details the Key issues to review to develop a long-term mobile strategy and shows you
how to develop models to prove the case for investment and ROI from mobile marketing. It also provides practical guidance on taking the right decisions on mobile sites, search marketing and couponing.

Chart of the week: 77% of online minutes in the UK are spent on mobile, showing that mobile-optimized marketing really is a must The amount of time people are spending online is on the rise, with most opting to access …..

Statistics on consumer mobile usage and adoption to inform your mobile marketing strategy mobile site design and app development “Mobile to overtake fixed Internet access by 2014” was the huge headline summarizing the bold prediction from 2008 by Mary Meeker, …..

There are many technologies that are set to impact the mobile app development industry in 2020, let’s take a look at some of the biggest trends In an era when the world is heading towards digitalization, mobile apps are gaining …..