Which are the most effective advertising formats today?

New research by Nielsen shows the ad formats which are most and least trusted by consumers.

Trust is a hugely important factor in advertising success. If you don’t trust someone, you generally don’t take their advice, wheras if someone recommends something and you trust their judgement, you are far more likely to do it. If everyone trusted all advertising formats 100% then we'd all be getting ripped off by people using advertising for nefarious means. In reality, trust matters a lot, and this research shows that we trust some advertising formats much more than others. For example, emails signed up for are trusted approximately twice as much as text ads on mobile phones.

The majority of advertising channels have seen their trust decline somewhat over the last two years, although there are some silver linings for some digital ad formats. Ads on mobiles and ads on social networks both saw their levels of trust increase slightly, although admittedly this is from rather a low base. 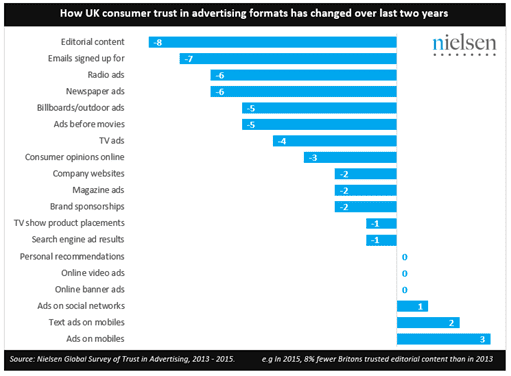 Editorial content saw a major drop, which is probably due to a trend towards native advertising, where ads are made to look like actual articles, so as to draw clicks from those who wouldn’t usually click on them. When advertisers are abusing this trend and not actually creating quality content then it drags down the trust of the medium over all.

Below is a screenshot from the Telegraph’s (a major British Newspaper) website. It is the first thing that appears when a reader has finished reading an article, and is designed to appear the same as the other stories from the telegraph which also appear at the end of articles. However they are actually adverts.

'Email’s signed up for' also saw a significant drop, although it remains the 3rd most trusted source in the UK. This may be because email marketers are overusing the medium and sending out too many emails. Audiences become saturated when they receive so many messages they stop being useful. It may also be that so many businesses are attracted to using email marketing because it is trusted and effective. This means it’s effectiveness is being diluted as more and more companies, even the less trustworthy ones, attempt to capitalise on the effectiveness of the medium.

TV ads saw a decline of 5% on previous years, but maintain the trust of a respectable 56% of UK consumers. Trust in company websites declined at a lower rate of 2%, meaning that 52% of UK consumers trust them. Company websites are an important medium to showcase one’s brand and offering, and as the destination of many other marketing campaigns should be optimised for retention and conversion. Interestingly, if these present trends continue, company website will overtake TV ads for trust within two years.

Digital ads tended to gain slightly or at least not loose out when it comes to trust. Online banner ads and online video ads saw the level of trust remain the same as in previous years (no mean feat when the over-all trend is for more sceptical customers) and ads on social networks and mobiles saw a slight increase of 1% and 3% respectively. So now you know the trends, but what of the absolute levels of trust we are currently seeing in the advertising industry? 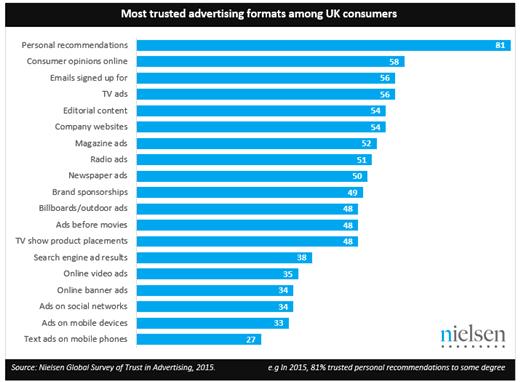 Personal recommendations are on top, which makes sense given a friend is far more likely to offer an unbiased recommendation based on merit than a company’s advert who’s purpose is to sell products and increase revenue. Emails signed up for are a highly trusted source of marketing, so organically growing your email list is a good idea. Editorial content also ranks quite highly, which means content marketing is clearly an effective medium and should be planned, managed and optimised to get the best possible results.

Digital media often don’t rate too well on this list because they are relatively new mediums and online banner ads in particular are often deliberately misleading in an attempt to generate clicks. Marketers should use this list not only to select advertising mediums that currently enjoy high levels of trust, but also to consider how they can make their content on less trustworthy channels appear trustworthy. Making big promises that can’t be delivered probably will fail to deliver results because costumers are used to it and will phase out such messages. Honesty pays in all advertising mediums.

Of course, it's worth bearing in mind that these are only consumer reported behaviours rather than their actual behaviour. So it's also needed to compare these insights against actual ad format and media effectiveness as reported by analytics or marketers.

Five practical steps to improve your video SEO and align objectives with strategy and tactics Video is becoming an increasingly important element in the modern content marketer’s toolkit. When we consider that YouTube alone is the world’s second largest search …..

Map your customer journeys to fix your CX issues

In order to fix your brand’s customer experience (CX) issues, you first need to find the problematic experiences In life as in business, having a clear vision and tactical execution maps are essential for success. Otherwise, as Lewis Carroll cleverly …..